GeekGoesChic > business of fashion > Fashion blogger – a profession in its twilight. Democratization of fashion – the biggest myth in the global fashion industry.

Fashion blogger – a profession in its twilight. Democratization of fashion – the biggest myth in the global fashion industry.

Just 2 years ago I wrote about the big role of bloggers in fashion. That they are the future of fashion journalism and they can seriously threaten the fashion magazines like Vogue, Elle or Harpers Bazaar. Nowadays, I slowly withdraw from this claim. Internet users and the global fashion industry are fed up with the race of who will shine during the fashion week. Instead of democratizing fashion, bloggers make a farce out ot if. Besides, only things that are inaccessible can be interesting for the readers – who are looking for an inspiration. Fashion bloggers in H&M only? Small chance of success. Unfortunately, a fashion blogger is a profession in its twilight. It never has a chance.

A few words on innovation and fashion adaptation.

There is a scientific explanation of why fashion won’t democratize itself and why most of the fashion bloggers have no chance of success. They are not innovators and their work isn’t symbol oriented. To explain it I will quote my master’s thesis:

“The goal of fashion marketing and branding campaigns is to build the brand and to manage it in such a way that it invokes clear associations in the minds of consumers, has a personality and enters into an emotional relation with the consumers. According to Stefania Saviolo, the Chair of one of the departments of the School for Managers SDA Bocconi, industries that offer prestigious and luxury goods are even more symbol oriented than those offering widely available goods:

Provided that the major brands balance between the need to provide functional and emotional profits. The really major brands that are symbol oriented focus on desires and pleasure of the consumer.

Bruno Remaury, a social anthropologist and a lecturer in the French Fashion Institute, went even further and said that fashion marketing is:

Both theories clearly pertain to the highest stories of the Maslov’s hierarchy of needs:

What’s important is the fact that the consumer doesn’t have to realize what his needs are and what are their foundations. They follow the fashion because they have a psychological tendency for imitation preventing the feeling of isolation. On the other hand, to become someone better and gain recognition – they rebel and strive for innovation. Moreover, when they manage to satisfy the basic needs, located on the lower levels of the pyramid they have an even greater tendency to compete with others in a never-ending, public fight for position in society. The person that is most heavily influenced by fashion trends – the first to adopt them and the first to reject them – is Simmel’s fashion leader who shares his opinion or the Albridge’s flâneur – the elegant seeker of elements of society and culture not yet discovered by others that are suitable to diversify and enrich his or hers image.

Such a person consumes only for show and stems from the upper classes, the members of which are the only ones that can fully consume and understand elements of the fashion. People who are subject to fashion, fashion leaders, belong to the society of curators in which:

everyone became an artist and curator with an eye for smallest details of their lives, ready to sample, edit, cut and put together everything that stand in his way.

Flâneur is, therefore, an exhibitionist – demonstrating what he managed to sample, on the other hand he is a voyeur – he observes shop windows, other curators and the fashion itself, gets inspired by novelties. A significant feature of today’s curators is the fact that the innovations they adopt come both from Haute Couture and fast fashion:

the new, intelligent fashion consumer is not afraid to buy products from different levels of the fashion pyramid.

Therefore, the determinant of attractiveness is no longer the financial factor and the unavailability – fast fashion is created immediately after ready-to-wear and the high fashion designs start to appear. That’s why nowadays the consumer pays even more attention to the time to sample all the trends even faster. He is interested only in a single, mysterious, fleeting impressions capturing delightful manifestations of the human comedy – of fashion. To fully optimize the time and take over the control of his exhibitionism he could retreat to the household zone thanks to technology – observe and create his image online (but is every blogger a fashion leader?).

The process of introducing and giving up on innovation, however, is continuous and repeatable. After a new trend is introduced and a social consensus on its appearance is reached it is immediately being given up on and disappears . In fashion’s lifecycle only 2.5% of all consumers are responsible for the occurence of an innovation – fashion leaders: fashion editors, designers, celebrities and partly: fashion bloggers. At a later stage, only 13.5% of the people adopting a product contribute to the acceleration of the development of the trend: this is where most of popular fashion bloggers belong. The early majority, which makes 34% of consumers, provides the stages of acceleration thanks to which the general acceptance occurs: people who live in rich countries and cities. After that the “late majority”, which also makes 34%, starts to consume the product and contributes to negation of the trend. About 16% of people start to follow a trend after it had been given up on by the innovators, early adopters and the “early majority”.

The process of introducing and giving up on innovation is driven by corporations which become global agents of cultural changes. The lifecycle of trends is one of the reason why fashion magazines come out in cyclical intervals. The press helps consumers adopt and reject new ideas and offerings of designers and the shorter the lifecycle, the more often the fashion users want to read them. 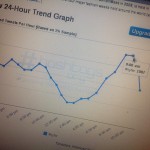